How to Differentiate Between DaaS, VDI and other Cloud Environments?

Cloud computing and related solutions are indeed a vast domain. With so many cloud solutions and architectures to choose from, it becomes difficult at times for those who are not well conversant with cloud powered solutions. 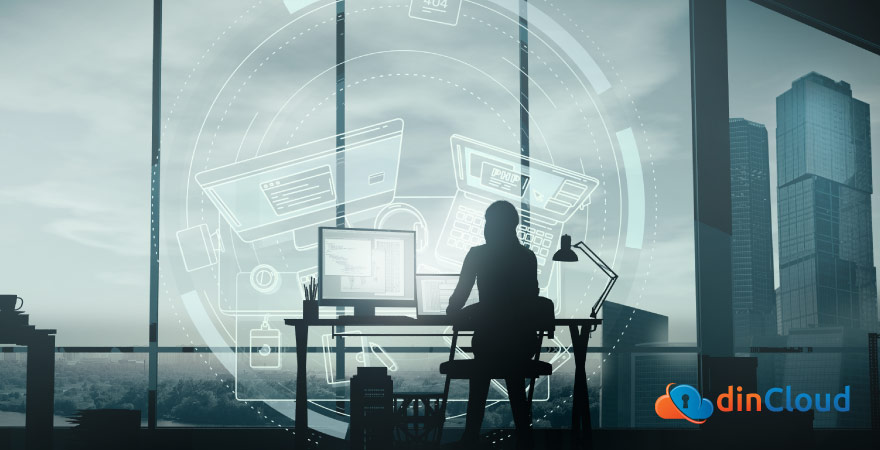 In this post, we will focus on differentiating between Desktop as a Service (DaaS) and Virtual Desktop Infrastructure (VDI). With that out of the way, we will further discuss the key differences between persistent and non-persistent virtual desktops.

Before we dive into the differences between DaaS and VDI, let’s first briefly discuss Desktop Virtualization. Both DaaS and VDI are the two mainstream technologies through which you can deliver virtual desktops to end users. Let’s study them both:-

DaaS – Desktop as a Service

In the DaaS model of deploying virtual desktops, all the underlying IT infrastructure is procured and maintained by an external Cloud Service Provider (CSP). These are also commonly referred to as Managed Service Providers (MSP).

All your virtual desktops in the DaaS model are created over the specialized data centers of the public cloud provider like dinCloud. End users tend to access their virtual desktops over the internet by using a secure end to end encryption (E2EE) gateway.

A great advantage of the DaaS deployment model for virtual desktops is that you don’t have to worry the least bit about IT hardware and infrastructure. Another advantage of DaaS is that your end users can enjoy a seamless experience even over low end devices.

This is the other mainstream deployment model for virtual desktops. Unlike the DaaS model that relies on outsourcing, VDI is fully managed by the deploying entity itself. The process of VDI starts with setting up a data center on premises.

Setting up an on premise data center firstly demands a large upfront capital expenditure. With the financial aspect covered, the next major challenge in case of VDI is whether the deploying entity has the requisite human expertise to setup and manage VDI.

Another key aspect of VDI that acts as a deterrent for most organizations is that you constantly need to invest in upgrading your VDI hardware to extract the optimal performance. This can at times become a burden even for larger enterprises.

DaaS or VDI – Which is Better

Well, there is no definite answer to this question. The choice between DaaS and VDI will depend on the unique circumstances or priorities of the deploying entity. Still, DaaS has an obvious edge over VDI on many decision criteria.

Now that we have covered the difference between DaaS and VDI, let’s discuss the key differences between persistent and non-persistent virtual desktops. This aspect of virtual desktops pertains strictly to end user experience, but is still an important factor.

In case of persistent virtual desktops, the individual preferences of each end user are retained over each session. Some of these preferences include the desktop layout, orientation of applications and even in-app preferences at times.

Although persistent virtual desktops deliver a superior end user experience, they are firstly a resource intensive option. Whether delivered over DaaS or VDI, these virtual desktops will require extra resources to store each user’s individual preferences.

Still, if superior user experience is a key consideration, persistent virtual desktops are the better option. This delivery model also adds to the structural complexity of the virtual desktop infrastructure.

Whenever a user logs into the virtual desktop architecture, the cloud management software will allocate a virtual desktop to that user from the pool of available ones that are currently not being used by another user.

As soon as a user logs out of the session, any individual preferences are restored to the default condition. This deployment model prioritizes resource optimization instead of end user experience.

In this model, user groups are identified as per unique needs and a pool of virtual desktops is made available to each user group based on its productivity needs. This delivery model provides a soft spot between the two delivery models discussed above.

We are a rapidly growing public Cloud Service Provider (CSP) that offer a highly robust, secure and reliable DaaS solution in the form of Cloud Hosted Virtual Desktops. dinCloud’s DaaS (dinHVD) offering is one of the best in the cloud computing industry.

Contact Us for your Desktop as a Service (DaaS) needs and dinCloud’s professionals will design a solution that is both efficient and cost effective.