Transition to the Cloud Gaining Momentum as per Recent Study

Cloud based solutions and services are gaining a lot of momentum as more enterprises realize the inherent benefits. By their very nature, cloud computing solutions have the potential to deliver a highly flexible, scalable and versatile productivity environment. 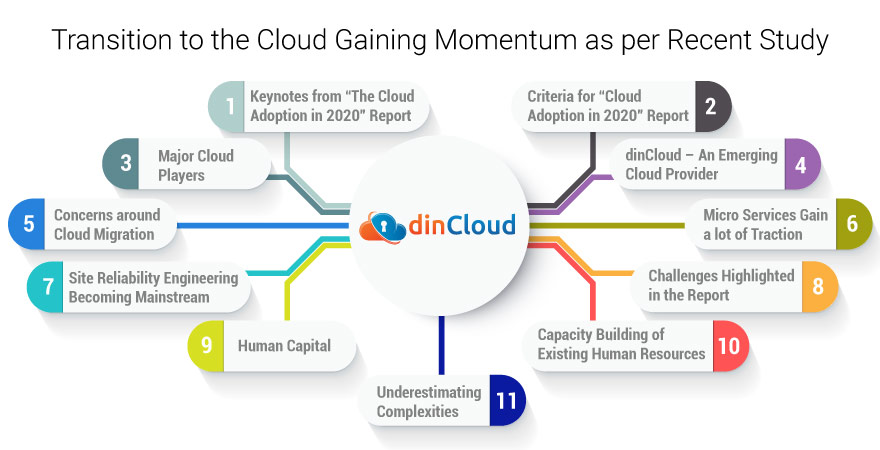 This trend was revealed in a recent study conducted by “O’Rielly Media”, a reputed technology and business training company. The crux of this study is that organizations intend to shift most of their apps to the cloud by the year 2021.

Keynotes from “The Cloud Adoption in 2020” Report

Below are a few key stats extracted from the comprehensive report about increasing adoption of cloud based solutions and applications:-

Criteria for “Cloud Adoption in 2020” Report

The study conducted by “O’Rielly Media” was based on a broad based sample size of nearly 1,283 vital IT decision makers at various enterprises. Here are a few more important insights from the report:-

One public cloud provider worth mentioning here is dinCloud, which continued its strong growth. The CSP has been consistently expanding its cloud user base on the back of a robust, secure and reliable cloud infrastructure.

dinCloud has consistently been improving its cyber security posture as well by integrating industry leading solutions. The findings of this study have also revealed that 65% of participants report cloud security as a critical area in their transition to the cloud.

Now, let’s highlight some areas of concern that were revealed by respondents in this study during the transition to a cloud infrastructure:-

As per the recent report, the trend of micro-services is gaining a lot of momentum. This is an approach to software and application development which focuses on ease of updating, patching and scaling the solution as per changing enterprise needs.

According to the study, SRE or Site Reliability Engineering is a technique well on its way to becoming a mainstream technology over the current and upcoming year. This method relies on intelligent software to manage, troubleshoot and automate cloud operations.

Challenges Highlighted in the Report

The comprehensive report also quoted a few challenges that organizations which have migrated to the cloud, or are in the process of doing so must keep in consideration. Some of these issues to watch out for include:-

The report states that most migrating entities focus more on the technical aspects of the cloud transition and in doing so, the human capability part tends to be ignored. Organizations must take account of the requisite skills required for the transition.

As soon as the requisite skill set has been identified, migrating entities must provision the right cloud professionals for the job. In this process, it is also not a bad idea to consider outsourcing some complex aspects of the transition to expert companies or professionals.

This was another aspect highlighted by the study. Even if you engage professionals for the transition process, the new infrastructure has ultimately to be managed by the exiting human resources. So, it is imperative to build their capacity and skills alongside as well.

This was also a key challenge identified by the report. Most migrating entities tend to commit the mistake of taking things for granted and at times, even underestimating the complexities related to the cloud transition.

Any such miscalculation, as per the report, can firstly derail the strict timelines defined for the whole transition process. Secondly, this can result in at times massive cost overruns and other complexities associated with the inability to accomplish a task within the timeline.

The study notes that proper homework before engaging in a cloud transition is of utmost importance. Once the planning phase is complete, the next critical step is identifying the right Cloud Service Provider (CSP) for your needs.

dinCloud is a well established name in the public cloud providers landscape. Our cloud hosted solutions and services are highly reliable. Contact Us for your cloud computing needs and we assure you won’t regret this decision at all.