The History of Cloud Computing

The cloud has simply transformed the way we execute our work and interact with various devices. The cloud computing revolution has really proliferated the availability of information technology to the masses. A lot of Cloud Based Services today are enjoyed by us for free, or by paying just a nominal sum of money. 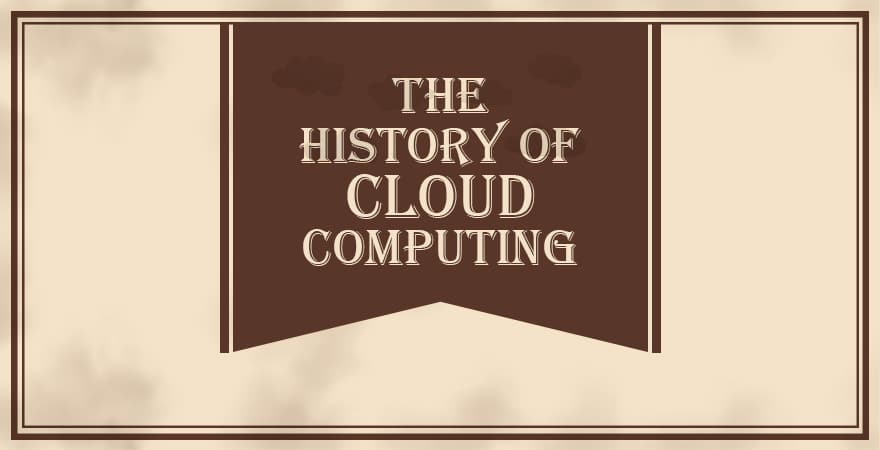 The past of computing in general and cloud computing in particular was not at all as promising as its present and future. We are currently in the cloud revolution and more entities are appreciating the immense benefits that cloud computing has to offer. 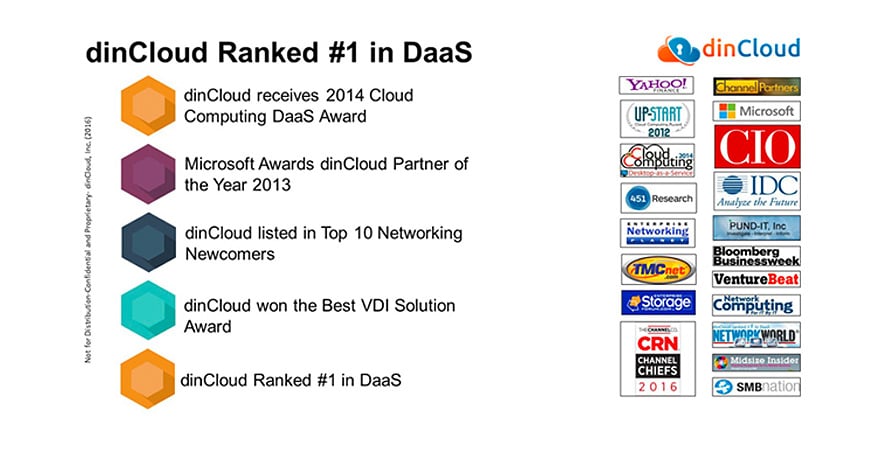 How the Internet was Born?

A key feature of the ARPANet project was that these computers had the capability of communicating among themselves. It was supposed to be a fully secure network over which the government planned to relay highly classified information.

Also Read: The Story Behind Desktops-as-a-Service

Let’s take a peek into the history of computers. The computers, in their earliest days, were nothing like the nimble and sleek machines that we use today. On the contrary, a single computer could take up the space equal to a large room by today’s standards.

The primitive computers were sluggish, bulky and highly sensitive hardware. The main intended purpose of designing these computers were complex mathematical computations that could not be handled by expert mathematicians and statisticians.

These computers were highly prone to heating up and required special cooling arrangements just to keep them up and running. Despite a marginal computing muscle, these computers took up a lot of physical space and required a lot of capital investment.

Back in the days, metallurgy and precision technologies were non-existent and the process of making a single computer would consume a lot of time and raw material. As a result, the computers of the past could not be afforded by even the most affluent members of the society.

The owners of primitive computers were either state organizations or financially sound universities. State entities were focusing their efforts on achieving a military edge over adversaries, while universities provisioned these machines for the sole purpose of academic research.

Also Read: How Desktop-as-a-Service enables the Future of Work

Even the primitive computers packed a lot of processing punch by the standards of those days. Therefore, more and more people wanted to avail these computers for their tasks. However, due to the limited supply of computers, this was not possible.

This limitation was further aggravated by the fact that back then, there was no means whatsoever to access these computers from a remote location, the way we access a lot of our machines these days. Each user had to physically show up at the location of the computer for any computing to be executed.

Also Read: 3 Remote Work Challenges and How to Solve Them

As a result, there were never ending queues of users, especially in universities and other research oriented institutes. Secondly, these computers were not capable of handling tasks in queue. Each task could be executed only after the preceding task was completely done.

How to make the Computer Accessible?

The exclusive access of primitive computers was direly felt by the masses, who also wanted to leverage these computers for their tasks. However, given the astronomical cost of these machines, a common person could not even think of buying such a machine.

Some via media needed to be developed, whereby more people could access the computing resources of these primitive machines. This gave rise to the then ingenious idea of “time share”. This innovative idea greatly improved the accessibility of these computers for more people.

Also Read: 66% of Professionals Say They Would be More Productive Working Remotely

Based on the received input, the computer could successfully start executing the tasks as per certain prescribed protocols. This could perhaps be called the beginning of programming era. This solved two great problems that the users of primitive computers were facing.

Also Read: Cloud Technology is the key to Overcoming Growth Challenges in the Legal Industry

Firstly, a user could now access the computer from a remote location if there was access to a typewriter and a phone line. The typewriter would act as an input device while the phone line would serve as a transmission mechanism for the information being passed onto the computer.

With time share, a user no longer had to wait in long queues for the turn. Rather different tasks could be placed in queue one after the other. Of course those primitive computers did not have multi-core processors that come in modern machines which can handle multiple tasks at a time.

The tasks of different users could be queued up and each subsequent task would start as soon as the preceding one was complete. By old standards, this was a great solution but still, this did not resolve the accessibility of computers to the masses.

Via time share, the few privileged owners of computers started offering the facility to users in exchange for a certain fee. This was a win-win situation for both the parties involved. The entities that had the financial resources to set up computers started setting them up at a rapid pace.

On the other hand were end users who wanted to avail the computing resources, but could not even think of affording a computer. The solution was that people would pay these entities a fee in exchange for using their computing resources.

This resulted in the rapid growth of a whole industry in which computing resources were offered to the masses for a certain fee. Many startups mushroomed all over America to exploit this great business opportunity. The idea of using computers for tasks against a fee was greatly welcomed by the masses.

Although the above phenomena was not named cloud computing straight away but if we look in hindsight, the above arrangement had all the classical ingredients of any modern cloud computing solution. On one side of the picture were resource providing companies and on the other side were multiple users of those resources.

Evolution of the Personal Computer

It is rightly said that the only thing that is permanent is change. Despite the apparent success of the above model we have named as time share, some innovators of the time visualized the reduction in size of the primitive computer. At first, the main focus was to reduce the bulk of these machines and processing power was not a consideration.

These innovators are the ones that deserve the credit for personal computers that are in billions today. With advancements in the field of electronics, many bulky devices were greatly reduced and computers were definitely among the main beneficiaries of this progress.

The reduction in size of computers translated in the reduction in costs and now, computers were being mass produced and their prices were fairly within the reach of common people. This is when the era of the personal computer started and we could see one every now and then in offices and homes.

Alongside these innovations, the computers were not only evolving in size, but also becoming more powerful and versatile. In addition to handling basic calculations, computers were now handling more complex tasks and processes. Even a basic personal computer packed far greater processing muscle than a primitive computer.

Birth of the Internet from ARPANet

Every personal computer could possibly become a part of the internet and most did so. It is rightly said that one can’t remain aloof from a revolution and this can’t be truer for the internet. There was massive research and development in the fields of electronics and communications.

With rapid advancements in IT, the speed with which data could be transmitted over the internet was phenomenal. This was the start of the Internet Service Providers (ISP) boom that fiercely competed with one another to offer the fastest internet speed at the most affordable price.

The Dilemma Leading to Cloud Computing

With rapid proliferation of personal computers (PC) and super-fast internet, everyone wanted to execute everything over the personal computer. By now, the PCs had reached billions and spread all across the globe. This gave rise to the global dilemma that acted as a catalyst for cloud computing that we know today.

The first challenge that organizations faced was that their business critical data was spread over hundreds or thousands of individual computers. This was not only an administrative challenge, but also a major cyber security threat. It is virtually impossible to secure data over so many individual devices.

Another challenge was that of maintaining a uniform enterprise software (ERP) environment. It is an administrative nightmare to install, configure and maintain an ERP software over so many individual devices. Invariably, certain devices are bound to run into technical bottlenecks, thus affecting organizational efficiency.

The Need for Centrality

When organizations considered the above challenges, the only viable long-term solution was to revert to the centrality model that can be recalled by the time share phenomenon. This need resulted in the final evolution of cloud computing that we know and experience these days.

Given the need for centrality of data and productivity software, Cloud Service Providers (CSP) were created. In a cloud based solution, all the data of a company resides at a single data center of the CSP. This solves the issue of data centrality.

Even otherwise, it is much convenient to secure data at a single location rather than many individual machines. Users login to the cloud via the internet and gain access to their data. They can also make any changes to the data, which in turn will also be saved over the cloud.

On the same principle of data centrality, CSPs offer fully integrated productivity and enterprise resource planning software (ERP) solutions over their cloud services. This enables organizations to not only store their data at central location, but also execute processes over a central location.

Here is the other great aspect of a cloud based solution, all the processing muscle is provided by the CSP and not the device used to log into the cloud network. CSPs invest heavily in storage and processing and their resources are virtually limitless in both the above departments, provided the client has the requisite resources.

This principle also dates back to the same model of primitive computers that were being used by multiple people in exchange for a usage fee. The two key differences here are that firstly, today’s CSPs offer phenomenal processing power and secondly, users do not have to wait in queue for their task to be executed.

Modern CSPs have millions of users that are executing billions of processes over the cloud network. The immense processing power of CSPs, coupled with today’s ultra-fast internet ensures a seamless user experience even while executing some of the most processor intensive tasks.

If we retrace the long journey to present day’s cloud computing, it is an eventful one. It all started with a highly centralized model but towards the mid of this journey, we moved away from centrality and towards localization. Once we realized the inherent flaws of the localized model, we reverted to centrality.

This reversion to centrality finally led to the cloud computing revolution in which we live today. Today’s CSPs are coming up with out of the box and highly customized cloud based solutions that are suited to the needs of each individual entity or organization.

It is quite difficult to say what the future holds for us because the IT landscape is constantly changing and evolving. One thing is for sure though, cloud computing is here to stay and as more people and organizations grasp its inherent efficiencies and advantages, they won’t take long to migrate to the cloud.