As early as 2010, “hosted virtual desktops” (HVDs) have been under discussion, with gurus and futurists proclaiming the benefits of moving to such a solution.  In fact, one analyst noted in this article from ZDNet in July of 2010, that 2011 would be the “year of desktop virtualization.”  The author himself theorized that the technology just “makes too much sense.”

The story hasn’t really changed all that much since then, other than we are well beyond the “tipping point.”  Forrester Research surveyed up to almost 500 businesses over the years from 2012 to 2015 and you can see a snapshot of the results.  Almost 25% of the businesses surveyed planned to adopt VDI or Application Virtualization solutions by Q3 of 2015, up from less than 10% in 2012.

Gartner, themselves, has stated that now, hosted virtual desktop solutions are the “default workspace of choice.”  Gartner’s Market Guide from November of 2016 stated that the analyst firm “sees the cloud as becoming increasingly important.”  Some of the benefits the guide listed included:

For years, businesses have been lured by these attractive benefits and have turned to the big public cloud providers, but without realizing all of the complexity that can come with it.  Instead of reducing headaches and increasing productivity, businesses were left to figure out how to get their cloud migration story back on track.  Ovum’s Decision Matrix for 2017-2018 states, “For many organizations, the biggest challenge that cloud computing faces in 2017 is dealing with an increasing level of complexity as a result of the sheer number of different services on offer.”

Filling the Gap for Desktop-as-a-Service

In 2011, dinCloud saw the need for an easier to manage, transparent and more secure Hosted Virtual Desktop and Desktop-as-a- Service solution, all while maintaining a focus on security.  Virtually instantly, dinCloud rose in the ranks of cloud service providers with our focus on security (Business Continuity), transparency (Flat-rate pricing) and support (simple, ease of use).

Right out of the gate, dinCloud saw accolades from the likes of Network World in May of 2012.  And under the “cons” column, the reviewer came up with one word to describe dinCloud…”none”.  With a total score of 18 out of 20, no other provider could beat our hosted Workspace solution.  In the years to come, dinCloud would win several awards touting the solution as the “Best DaaS” or “Best VDI” solution. 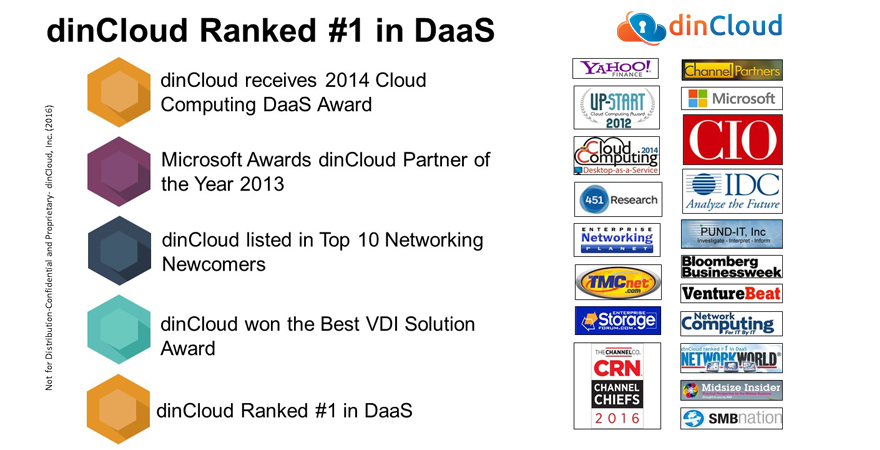 But don’t just take our word for it.  Here is what several industry analysts have said about dinCloud:

“dinCloud is a good example of a number of converging trends in infrastructure and IT services. It provides a service delivery model and a range of infrastructure services that can help IT services providers get to market faster with a comprehensive offering”.

“The market is ripe for cloud services companies to lead the pack with online provisioning and management tools for specific cloud tasks. dinManage stands out not just because of its business model, but also because it helps customers manage their entire virtual data center including desktops, servers, storage and security.”

“The number one barrier to client virtualization adoption is a lack of internal resources and skills. Also high on the list is immaturity of the technologies. However, as we see with other cloud and SaaS technologies, these concerns can go away when a provider has the expertise and infrastructure already, and the service is easy to consume and affordable. DaaS providers like … dinCloud have considerable experience and maturing infrastructures.”

Want to learn more about how dinManage and dinCloud can help your business? Fill out this form and one of our team members will give you a call.