We are all quite familiar with the idea of fireworks. They have been a staple for celebrating national events, achievements and any other important event that incorporates the element of festivities in some way.

However, fireworks have always been expensive, dangerous and not an eco friendly option. The reason they became so popular is that until the introduction of cloud powered drones recently, there was no viable alternative to the good old fireworks.

Say hello to the era of drone light shows, which have truly left spectators awestruck and bedazzled all over the globe. This “new kid on the block” is not only much easier on the ears, but is also a much more eco friendly option as compared to fireworks. 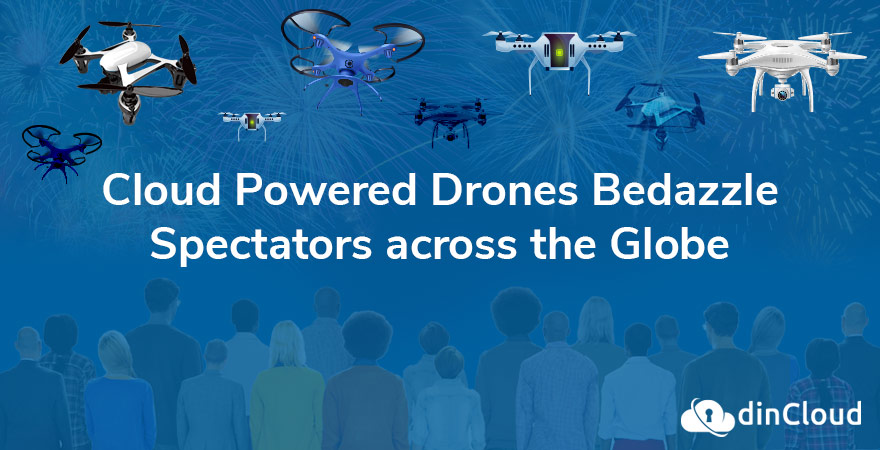 Let us also not forget the countless mishaps that have took place across the globe at places where the manufacturing, storage or use of traditional fireworks was involved. The good thing is, many leading tech companies have already set foot in this domain.

Related: Cloud Powered Desktop Virtualization and Why Enterprises Prefer it?

What can Drone Light Shows Do?

This is yet another very interesting aspect of drone light shows, which is their versatility. By synchronizing a large number of illuminated drones in the night’s sky, one can create animations, do storey telling or give a peek into the future as well.

When an established technology giant like Intel steps into the realm of drone light shows that are powered by the Cloud, we can easily bet on this ground breaking technology to become the perfect replacement for traditional fireworks.

That is not all, as a company like Intel did not want to enter the world of drone light shows in a quiet way. So, the company went on to set a Guinness World Record for the highest number of light drones illuminating the night’s skyline at any one point in time.

Here are some of the most compelling arguments in favor of adopting, and mainstreaming drone light shows in the near future.

Unlike traditional fireworks, which are a one-time use item, these drones can easily be re-used without any hassle. By employing LED technology, these drones are capable of producing a wide range of colors during the same show.

Related: How a Cloud Powered Digital Workspace Benefits an Organization?

Most of the drones being used right now in drone light shows are small in size, and are powered by re-chargeable batteries. This not only enhances their shelf life, but also makes them an environment friendly option when compared to fireworks.

Controlling a single drone in the sky with absolute control can be challenging, let alone managing a large number of drones in perfect sync. That is not all, every drone that is part of a show also keeps changing its color to perfectly align with the show’s template.

Well, it all begins with the planning and orchestration phase. In the first instance, the whole drone light show is virtually created over the cloud infrastructure of a Cloud Service Provider (CSP) like dinCloud.

After finalizing the layout, comes the crucial phase of orchestrating the show virtually, right down to each and every millisecond. Then, many simulations are run, using the immense storage and processing muscle of the Cloud.

This results in any last minute changes to the drone light show. Then comes the actual moment of truth, when hundreds or thousands of drones take to the sky in a perfectly synchronized dance that is miles better than traditional fireworks.

As soon as the breathtaking and perfectly synchronized drone light show comes to an end, every drone lands safely on the ground, ready to replicate this show at some other location, or be a part of a new show altogether.

By now, Intel is credited with holding nearly 1,000 drone firework shows in over twenty three countries across the globe. With every passing event, the number of drones is steadily increasing, and so are their spectacular performances.

It is technologies like Cloud Computing, 3D Simulation and LED lights that have enabled drones to become a much better, safer and environment friendly alternative to traditional fireworks. This is the best bit about technology, it never ceases to surprise us.

Contact dinCloud for cloud computing solutions like Hosted Virtual Desktops, Servers and Databases for a wide range of use cases.

You can also Request a Demo of our cloud solutions, or Get a 14 Days Free Trial as well!

A Snapshot of the Ransomware Landscape in 2021 by Sophos

A Snapshot of the Ransomware Landscape in 2021 by Sophos