Why DaaS (Desktop as a Service) ?

Desktop as a Service (DaaS) is a very intriguing proposition. It is the virtualization of a personal computer, or desktop, in the same way that many companies have virtualized their servers. Instead of investing in the infrastructure and architecting everything in-houses, DaaS allows an organization to use the capabilities behind DaaS and enjoy the benefits as a turn-key service.

Why would someone want to use DaaS?

Virtualizing a desktop offers a number of benefits, ranging from cost efficiency to enhanced productivity. Imagine a company employee who must use different software applications – these might run on different operating systems or have mutually exclusive requirements of the computer. Instead of issuing multiple laptops to the employee – you issue them virtualized desktops so they can run them through a browser.

For the last several years, interest in VDI (virtual desktop infrastructure) has been growing. Numerous IT organizations have embarked on highly expensive capital investments and brutally grueling experimentation only to be frustrated by the complexity behind standing up a VDI environment. Numerous vendors have attempted to come to the rescue with “VDI in a box” or “VDI software” – only to add more confusion to the mix.

Over time, VDI has gone from something that was the only route to virtualized desktops to a very remote consideration in most organizations. Rather than spend money, spend months or years rolling out VDI in-house, companies now have the ability to try it as a service without the penalty of time and capital.

Evolution of DaaS (Desktop as a Service) 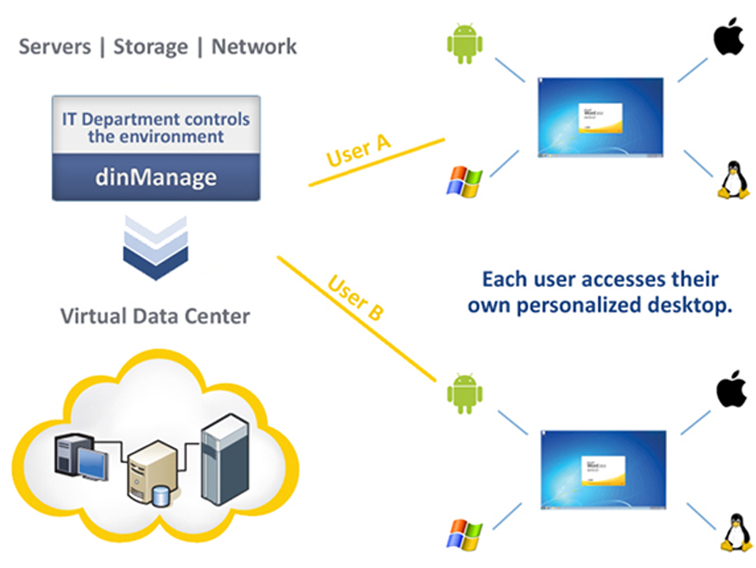 Desktop as a Service (DaaS) has evolved over the years but the concept of being available as a turn-key service has not changed. Numerous vendors have come and gone, offering DaaS in one version or another. Some have built their own software, trying to compete against the likes of Microsoft. Others have adopted 3rd party software that attempts to beat Microsoft at its own game. As the data center evolved and software defined networking and the software defined data center became more mainstream, costs came down in supporting DaaS. Yet, the complexity of integrating servers, storage, networking, and connectivity is still a mix of art and science.

Today, only a few DaaS providers are able to offer this turn-key service. dinCloud of course being a mainstay in the business. With the evolution of DaaS, performance improvements, software enhancements, internet and connectivity stability, and continual security bolstering have turned DaaS into a very robust offering that is worth considering.

How does DaaS work?

DaaS is a combination of running servers, networks, and storage in a reliable and high performance manner. Connectivity has a lot to do with the ability of customers to access their virtual desktop. One benefit of VDI has been that employees can access their virtual desktop and their applications and shared files from the same network. With dinCloud, you can run both DaaS and IaaS (infrastructure as a service) in the same private data center. All this is wrapped by layers of security. This allows a company to access DaaS over an internet connection through a browser. The browser works with a connection broker that securely accesses the individual desktop of the employee. From there, the virtualized desktop is running on a powerful server as an independent virtual machine. It is allocated its own CPU processing power, memory (RAM allocation), and storage. Thus, it runs as a normal desktop would run.

What is dinCloud’s definition of DaaS?

DaaS is essentially accessing a dedicated and persistent desktop, assigned to an individual employee. With the evolution of DaaS, we call that desktop a workspace. It is persistent in that the employee can keep their own wallpaper and personalization settings. The virtual desktop is accessible from a browser window or through a local application on either Mac, PC, Android. This means that the employee can work from one computer, then leave that device, and continue their work at another location on a completely different device. This brings a whole level of convenience and productivity that isn’t possible with conventional desktops.

facebooktwitterlinkedinpinterestEmail
Are hosted virtual desktops right for your business?
Talk to us
Test drive virtual desktop from your work computer
Schedule a Customized Demo