Since Virtual Desktop Infrastructure, or VDI, was first introduced in 2002, the technology has seen significantly grown. As more businesses began looking to simplify their IT infrastructure and desktop deployment, the ease of virtual machine implementation attracted many businesses to the promise of the technology. Fast forward to 2019 and the subscription economy we find ourselves in and VDI has transformed into Cloud-Based Virtual Desktop Infrastructure, or Desktop-as-a-Service (DaaS), further simplifying desktop deployment while reducing costs and infrastructure needs while simultaneously increasing security. 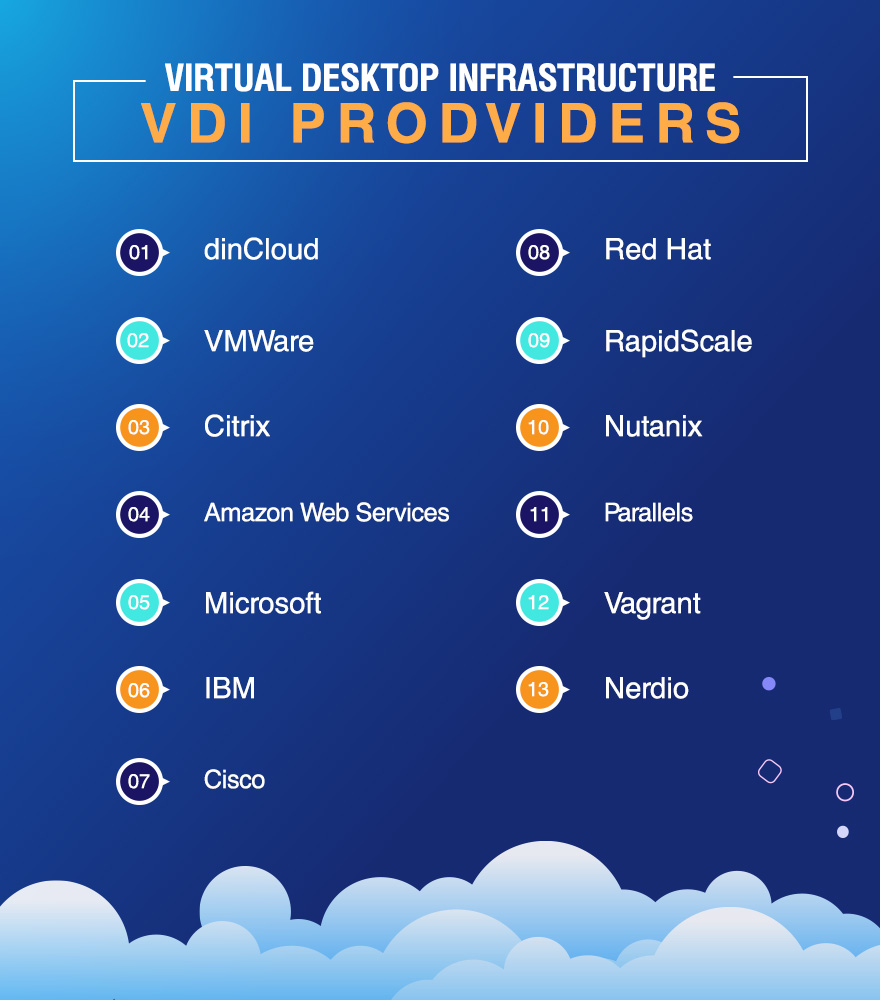 As the stability and security of virtual desktop infrastructure has grown, so we are here to list the best available providers of VDI. While each has their own pros and cons, we thought we would compile a list of some of the biggest players in the VDI industry.

In 2018, Gartner declared DaaS as the defacto solution of choice for business workspaces. With expected CAGR growth over 49%, it’s no surprise. Businesses are transforming digitally, and many of them are choosing to utilize Hosted Virtual Desktop Infrastructure as the basis of their transformation. dinCloud was honored as a key contributor and provider of Desktop-as-a-Service for our impressive end-user experience and platform performance combined with our transparent, flat-rate pricing has made dinCloud a competitive player. Learn more on how dinCloud’s brand of hosted desktops can help your business grow.

So, that’s all for today. If you have any questions regarding “Virtual Desktop Infrastructure Providers” or want to add anything, please feel free to contact us.

FAQs Related to Desktop as a Service – DaaS

How does desktop as a service work?

In Desktop as a Service or DaaS, you create virtualized instances of desktop computers over servers that are housed in the data center(s) of a Cloud Service Provider (CSP) like dinCloud. These virtual desktops have a software defined RAM, Storage, CPU and GPU.

End users access their assigned virtual desktops using the internet. These desktops can be accessed from multiple devices such as a smartphone, tablet, laptop or desktop. All the processes and workloads are handled by the DaaS provider’s infrastructure.

To further expand functionality and productivity, DaaS solutions such as dinHVD can be augmented with enterprise grade productivity software and applications. These productivity tools can be seamlessly integrated with DaaS.

What is DaaS in Cloud Computing?

DaaS or Desktop as a Service is a cloud computing technology that gives users access to fully virtualized cloud hosted virtual desktops. These virtual machines (VMs) can be logged in from multiple devices and wherever there is internet.

DaaS is offered by a third party Cloud Service Provider (CSP) like dinCloud. DaaS is a very powerful cloud technology due to its flexibility, versatility and instant scalability. In exchange for using their cloud infrastructure, CSPs charge DaaS users a fee.

In Desktop as a Service, all the underlying hardware and technology is managed by the cloud provider. A single DaaS provider may be serving multiple enterprises with DaaS technology through its large data center(s).

What is the Difference Between VDI and DaaS?

Both VDI and DaaS are two separate technologies for delivering virtual desktops. It is the service delivery mechanism that mainly differentiates these two desktop virtualization technologies.

In VDI, the virtual desktops are created over and served from dedicated, on premise data centers. In VDI, all the underlying hardware used to deliver virtual desktops is procured and managed by the deploying entity itself.

This makes VDI a costlier desktop virtualization technology when compared to DaaS. However, VDI provides the deploying entity more control over data security and privacy. VDI is mostly served through a dedicated, closed network for improved security.

DaaS is also a desktop virtualization technology. In DaaS however, the virtual desktops are created over and served from specialized third party Cloud Service Providers (CSP) like dinCloud. All the infrastructure in case of DaaS is the cloud provider’s responsibility.

DaaS products such as dinHVD allow you all the benefits of VDI, with the additional benefit of not having to maintain the underlying hardware and other aspects of the service. This reduces both costs and administrative overheads for the deploying entities.