Mac vs. PC – The Best of Both Worlds

I am a loyal Mac user. To be totally honest, my initial reasoning for making the switch from my archaic PC was superficial – I loved the sleek, sexy look of a MacBook Pro and imagined it fitting in beautifully with my modern décor.

After I made my impulsive purchase and was able to see past its exterior, I also came to learn that my Mac was just as beautiful on the inside as the outside. I hoped to never use a PC again, but I realized that most workplaces were PC-based and therefore having to use one would likely be inevitable.

My fear of having to switch to the other side was realized about a year later when I started a job at a company that only had desktop PCs. The adjustment was annoying for me. Even little things like having gotten used to the spatial layout of the keys on the Mac keyboard made me a slower typist and more prone to typos on a PC.

I soon began to grow accustomed to using a PC, but knowing two different systems didn’t mean that alternating between the two was simple. The same Excel document opened up at work vs. at home looked very different because it was different software (Microsoft Office vs. Office for Mac). The format was different, the layout was different; put simply, the whole process was frustrating.

I started my next job at dinCloud a year later. I was delightfully surprised to see a company embracing (and even encouraging) the new “BYOD,” or Bring-Your-Own-Device, generation. I mean, why wouldn’t they want employees to bring their own computers? It cuts costs of having to provide alternative devices. It also makes the process of switching between working from home and work seamless. And thanks to the Cloud, the whole experience (minus the external, physical machine) is exactly the same regardless of whether you are using an iPad, tablet, Mac, or PC. I really can’t see any reason against bringing your device of choice. 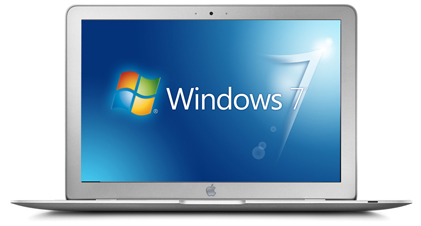 So it’s back to me and my Mac. All of my work (documents, programs, etc.) is supported by a Windows 7 operating system, but this poses no problem for my Mac and I because thanks to dinCloud, my Windows 7 desktop is hosted in the Cloud. There are no compatibility issues. There are some rare occasions on which I decide to give my Mac a break and use my PC desktop at work. If I need to complete any work when I go home, I simply open up my virtual desktop through Safari on my Mac and I’m immediately transported to the exact screen where I left off on my work PC.

The best part of it all? I still get to feel cool carrying around my beautiful and chic Mac on a daily basis.

For more information on our Hosted Virtual Desktop (HVD) and how it can supports BYOD, please visit our dinDaaS page or request information to speak with a cloud specialist.

facebooktwitterlinkedinpinterestEmail
Are hosted virtual desktops right for your business?
Talk to us
Test drive virtual desktop from your work computer
Schedule a Customized Demo