Businesses providing cloud-based services and products to enterprise organizations need to focus on enhancing their interoperability and integration capabilities if they intend to reap thebenefits of an expected growth in cloud adoption within the next two years.

This is one of the main takeaways from a global study of cloud adoption in the enterprise conducted by the research and business advisory firm 451 Research LCC for Microsoft Corp. Although 451 Research’s Hosting and Cloud Study 2015 was commissioned by a vendor, the study can be very useful to managed services providers (MSPs) and Cloud Service Providers (CSPs) in general because it delves into the existing and anticipated cloud needs of companies through the eyes of some 1,700 managers in the United States, South America, Europe, Asia, South East Asia, and the Middle East. As many as 78% of respondents said they were involved in IT purchasing recommendations; 77% are influential in IT decisions and strategies; 65% have “significant decision-making authority” regarding IT; and 53% actually build or maintain IT systems. 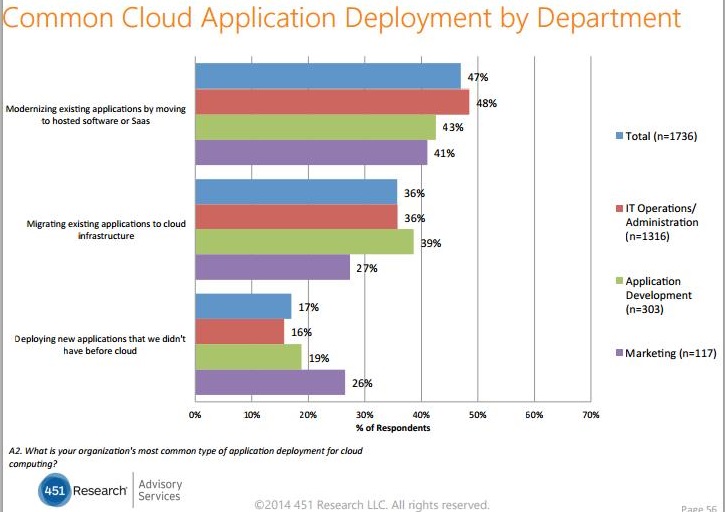 The ability of providers to deliver interoperability comes into play in the continued popularity of hybrid cloud technologies.

The data appears to echo the findings of an IDC survey commissioned by Cisco Systems in August this year. Titled: “Don’t Get Left Behind: The Business Benefits of Achieving Greater Cloud Adoption”, the poll queried some 3,600 enterprise executives on their planned cloud usage.

“The second wave of cloud adoption is emerging,” according to Nick Earle, senior vice-president of global cloud and managed services sales at Cisco. “Businesses are now adopting cloud to achieve transformative and measurable business value.”
451 Research said that by the end of 2016, 52% of companies intend to have moved applications and data currently residing in a public cloud environment to a hosted private cloud environment. Another 19% said they plan to move apps and data to an on-premises cloud environment. About 29% said they have no such migration plans, and 1% of respondents are uncertain of what to do. Security (35%) remains the top driver of migration to hybrid clouds, followed by the need for better IT control (19%) and improved performance (17%). Customer service was near the bottom of the list at 8%.

The top security spending planned by organizations within the next two years include endpoint security (46%), cloud data encryption (45%), and Web application firewall (43%).

MSPs and CSPs that specialize in backup and recovery, apps, mobile services and databases are well-positioned for the market environment in the near future.

When asked what managed services will account for a significant portion of the budget in the next two years, the respondents cited:

Nearly half of marketing departments will have 60% or more of their applications on cloud platforms.

So, who are the executives that MSPs and CSPs need to focus on?  According to the study, CIOs or CTOs hold the most influence when it comes to expenditures regarding IT operations and administration as well as application development. Marketing managers hold substantial sway on marketing projects, trumped only by the CEO in that area.

Nestor Arellano is a Toronto-based journalist who specializes in writing about technology and business news. Nestor reports on IT trends, new products and best practices, and how these can be of use to business and IT decision makers in the enterprise, small and medium size business space, and government.