When the term Zero Trust Security was coined by research giant Forrester, it seemed little more than a tech buzzword. However, time proved this notion wrong, and today, we find that Zero Trust Network Architecture has evolved into a staple for a robust cyber security posture at the enterprise level.

One of the best things about Zero Trust Security is how it completely negates the concept of perpetual trust. On the contrary, Zero Trust Security presumes that users, devices, networks, and other building blocks of the enterprise are prone to vulnerabilities, and will be exploited by some malicious actor, sooner or later.

So, instead of bestowing perpetual trust upon certain users or devices, Zero Trust Network architectures believe in continuous validation and verification. This was a giant leap forward from the network perimeter security approach, which used to be the norm before mainstreaming zero-trust network architectures. 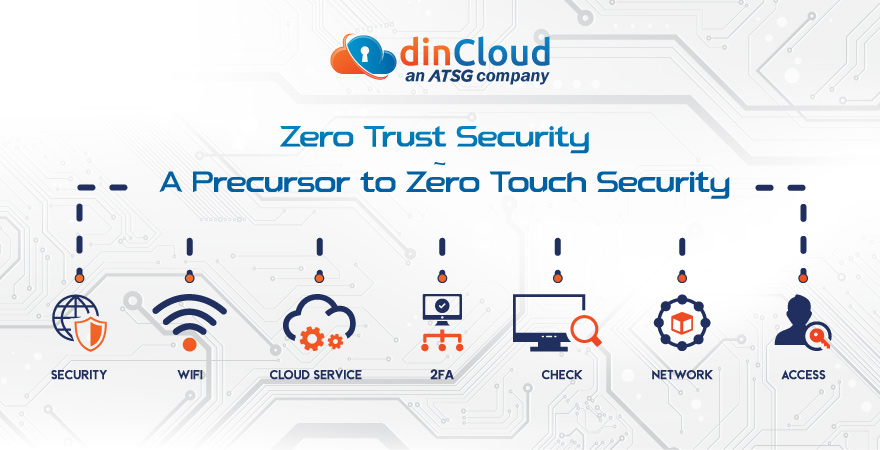 On paper, any zero-trust network architecture is a balanced approach toward cyber security in today’s hostile cyber security environments. Where things go “off-script” are a lot of limitations, both human and otherwise, which pose severe challenges in implementing Zero Trust Network Architectures.

Some limiting factors include, most importantly, the human element itself, devices, and other relatively disparate elements making up the enterprise network. In some cases, these limiting factors extend beyond an organization’s boundaries to include external stakeholders like partners and vendors, etc.

According to the 2022 Data Breach Investigation Report (DBIR), an overwhelming 82% of reported data breaches were caused by human-related events. This by no means undermines the importance and relevance of humans, but at the same time, it also highlights a weak link within the cyber security needs for the present-day environment.

What is Zero Touch Security?

Firstly, this is not to be taken as a misspelled version of Zero Trust Security, which is quite different from the latter on many counts. Just as Zero Trust was primarily focused on continuous monitoring of user and network behaviors, Zero Touch Security revolves around the concept of minimizing the “human element” from enterprise networks.

It is pretty evident that this won’t entirely be possible at this initial stage, and this could also remain the case for the foreseeable future. However, the adoption of automation regarding enterprise workloads and processes is doable. This is particularly true for repetitive processes, which are otherwise highly prone to human error.

How Does Zero Touch Security Work?

With automation being the central theme of Zero Touch Security, someone within the enterprise will still have to take up this new security approach. Well, this is where the role of IT admins with specific and in-depth knowledge of cyber security, as well as process automation, comes into play.

In the case of Zero Touch Security, end-user devices will be provisioned, set up, and configured by subject matter experts, whom we can refer to as admins, for lack of a more relatable term. These zero-touch security “executors” will set up user devices, access rights, and other aspects of user behavior while automating as many cyber security operations as humanly possible.

This automation of organizational processes, purely from the standpoint of improving the overall cyber security posture, will go a long way in keeping enterprise networks and sensitive data safe from cyber miscreants. The goal is to eliminate as many probable sources of cyber security breaches as possible by incorporating automation.

Zero Touch Security will also warrant that in-house IT, and cyber security experts understand the automation of processes. Your ordinary automation staff will not be able to comprehend fully and cover the cybersecurity-related loopholes within enterprise processes, users, or their behaviors, for that matter.

So, an inside-out approach will be required from enterprises to implement Zero Touch Security across the enterprise successfully. In this approach, IT admins with core expertise in cyber security and user behavior will have to step out of their respective comfort zones and undertake another daunting challenge of automating processes.

However, the results enterprises stand in line to achieve as a result of Zero Touch Security far outweigh the challenges leading up to it. Lastly, automation across the area of cyber security will pave the way for automating a lot of relatively less tricky elements of enterprise processes and operations.

Contact dinCloud, an ATSG company that allows a lot of automation across its cloud deployments, is made possible by a capable and intuitive Cloud Orchestration Portal called dinManage.