How a VPN Works and 14 Advantages of VPN

A Virtual Private Network (VPN) enables a user to connect to some other network in a secure way over the internet. Let’s break down this relatively complicated definition for you to understand the concept well. At one end of the picture is the end user. On the other end is the desired network to which the user wants to connect. 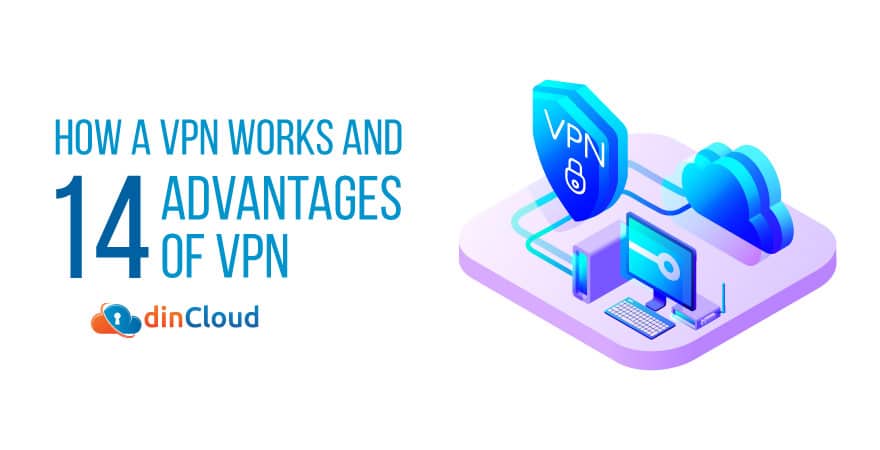 Also Read: Dealing with VPN access to the Corporate Network


A VPN will act as a secure via media between the end user and the destination network. In a normal setting, this mating occurs over the internet, but without any security protocols. A VPN does not eliminate the role of internet altogether, rather it makes the whole process secure.

Where Does a VPN Fit In?


A VPN fits into the whole picture right between the end user and the internet. Instead of directly using the internet, a user will first log into the VPN. Unique login credentials are given to each user by the VPN service provider. Once the connection between the user and VPN is established, routine tasks can be performed over the internet.


The end user experience is at times much superior to the one without VPN. This means that the user will not face any bottlenecks while interacting with the VPN. A user can familiarize with the whole VPN user interface in a matter of just a few minutes.

How a VPN Secures Your Browsing?


Without going into too many technical details, let’s briefly understand the tricks that a VPN has under its sleeve to make your time over the internet safe.


The first weapon up the VPN’s sleeve is encryption. A VPN will encrypt all the browsing data and activity of the user at the VPN level. The main advantage of encryption is that even if a user’s data falls into the wrong hands, it will make no sense for the unintended recipient.


The other tool which VPNs use to secure you over the internet is location masking. What this means is that you may be sitting in USA, but the VPN allows you to select one of its servers in the UK. Despite sitting in USA, your location will appear as UK to the network or process with which you are interacting.

Why Were VPNs Created?


It is an intriguing question as to what lead to the need for having VPNs. In the first place, VPNs were designed to securely associate business networks with each other. The multi-faceted benefits of VPNs quickly propelled them into the mainstream of internet.


It is pertinent to clarify the difference between a VPN and proxy, as the two are often confused with each other. A VPN is far superior to a proxy server as it has the added safety feature of data encryption. Secondly, a VPN connection is very fast and stable whereas a proxy server keeps disconnecting the user, which is quite irritating.


Now that we have covered the basics of a VPN, let’s highlight some of the main advantages of a VPN.


We don’t always have access to our home or office network. When we are on the move, we have to inevitably rely on the public networks to remain connected with our matters. This leaves our browsing history quite vulnerable to external threats that may exploit our private data.

A VPN, if compatible with your smartphone or device, will provide you a secure gateway even over a public network. This way, you can remain connected and productive while on the move, even while you are away from the comfort of a reliable network.


They are also an inescapable reality of today. As we always want to remain connected, we seldom hesitate to connect our devices with public Wi-Fi routers. These routers are highly susceptible to cyber-attacks and no major skills are required to break into a public Wi-Fi router.

When a user connects the device to a compromised router, all the browsing activity can be monitored and extracted by a cyber-criminal. Even the thought of this happening can make us really uncomfortable as our personal lives are now part and parcel of our daily used gadgets such as smartphone and tablets.

Through a VPN, you can comfortably login to a public Wi-Fi router and continue will all your routine activities. Even if the router is compromised and your browsing data falls in the wrong hands, it will be encrypted and make no sense for the intruder.


Inherently, the internet is a place with no boundaries. However, we as humans greatly value our privacy and would never appreciate our personal lives or data roaming about over the internet. A VPN makes your entire activity over the internet anonymous by adding a whole layer of encryption.

Even if your browsing history or personal data falls in the wrong hands, it would be in encrypted form and make no sense to the perpetrator. The element of browsing the internet anonymously is in itself a very empowering thing, which gives peace of mind to any internet user in these days of cyber threats.

VPNs Lock Out Your ISPs


Today’s Internet Service Providers (ISP) are also part of the privacy dilemma faced by internet users. Mostly without prior consent, ISPs tend to track and save our browsing preferences. The same is being done by the millions of websites we visit on a regular basis.

The unfortunate part is that even in cases where a user’s consent is sought, it is in such a confusing and implied manner that the user gets lost in the loaded jargon. The user agreements are otherwise so lengthy that the user loses track of the actual purpose behind the whole exercise.

With a VPN in place, even if an ISP or some random website is monitoring your browsing preferences, they can never be traced back to you. All the collected data, if any, will belong to someone who does not actually exist anywhere. This will save you from the nuisance of targeted promotional campaigns every now and then.


A quality VPN provider has its servers across the globe. When a user logs into the VPN, there is a wide range of servers at different locations from which the user can choose. Once a user chooses a server, the user’s location will change to the server’s location rather than the actual location.

This will enable the user to be physically present at one location, while showing up at an entirely different location. Firstly, this enables a user to remain untraceable while using the internet. Secondly, the user can avail many benefits that are reserved for the people of certain geographies.


This advantage of a VPN traces back to its very origins. A VPN can enable an employee to securely access the work network even from a remote location. This way, an employee can remain productive even if it is not possible to turn up at work in person. All that’s required is an internet connection.

Even otherwise, companies encourage their employees to use a VPN before remotely connecting to the company’s internal network for added security. Companies which house sensitive data do not allow access to their internal network without successful login to the entity’s VPN.


A VPN can add to organizational efficiency as well. It enables the sharing of sensitive business data and files securely over the VPN. Employees can simply login to the VPN and instantly share data. As it is an encrypted connection, the data is fully secure even if there is some cyber security breach.


In theory, there are no boundaries to the internet. However, various governments impose restrictions on certain websites for their local citizens. At times, these websites or platforms are used by millions of people and they want to circumvent this restriction without any legal consequences.

Through the VPN, a user can bypass any such restriction based on geographic or demographic criteria and avail the service or platform with complete anonymity. The user also remains completely untraceable and avoids any legal persecution as well.


ISPs have a variety of users and they try to deliver a good bandwidth to all categories of users. However, it is a common observation that users which avail video streaming over the internet consume a disproportionately high bandwidth. This severely affects the user experience of other clients of the ISP.

To deliver a balanced service to all classes of customers, ISPs tend to place bandwidth caps for customers that heavily use video streaming services such as You Tube and Netflix. This results in a very poor user experience. The servers of VPNs are very powerful and they do not place any such bandwidth caps.

As a result, if you use the same video streaming platforms via VPN, your user experience will be way better. A good VPN will bypass any bandwidth caps imposed by ISPs and you can enjoy a seamless video streaming experience, whether it’s You Tube or Netflix.


The browsing data and preferences which ISPs and websites store is then sold to various marketing agencies. For them, this data is a rich resource of potential leads. As a result, you will start receiving irritating calls from various CSRs that would try to sell you a product which you may have browsed online at some point in time.

This is a great nuisance and the most unfortunate part is that our personal data is collected and then sold to different marketing agencies without knowledge and consent. The data is sold not to just one, but multiple sales agencies which only adds to the ordeal.

If you use a VPN, there is no browsing history against you in the first place. Even if some data does exist in any form, it will definitely not be traceable back to you. You will be relieved from the irritating and unwanted calls every now and then for products that you don’t even need.


This is a very fun aspect of a VPN. The pricing of today’s products and services is not uniform, rather it is highly segmented on the basis of geography and demography. You can use the VPN to remove this disadvantage and trick the sellers of a product or service by altering your location.

Take a common example of airplane tickets. The prices of tickets are floating these days and depend on many factors such as demand and booking location. People have successfully availed decent discounts by purchasing air tickets just by altering their location through the VPN. The same rule can be applied to many other online products.


Today’s mobile data plans are quite expensive and we prefer to conserve our paid data. Instead, we feel more comfortable financially to use an insecure public network. By doing so, we are exposing our device and personal data to countless threats over such an exposed network.

If you have a good VPN, you can comfortably use the public network and conserve your paid data bought from various cellular companies. The VPN will provide a strong layer of security from the multiple cyber threats lurking over the public networks.


In today’s era that is rife with cyber threats and vulnerabilities, a quality VPN is more of a necessity than a luxury. Like many other products or services, there are countless VPN service providers across the globe. You have to carefully choose the best service provider in terms of features and price.

Regardless of the VPN provider you choose, don’t forget to avail a decent pre-purchase trial of at least 15-30 days. This will enable you to fully understand the different features of the VPN and whether it fulfills its claimed service quality. There is a VPN provider in the market that is just right for you.