Everything You Need to Know about SQL Server 2016

In less than a week, users will be able to access the newest edition of Microsoft SQL Server 2016.  Starting on June 1st, users will have access to all four versions of SQL Server 2016, which will include Enterprise, Standard, Express, and Developer, and it will be licensed per core, rather than per processor.

The Developer Edition-which will include the full set of features included in the Enterprise edition, would only be available for test use and development, not in production settings.  All users, whether new or existing, can expect a safer, smarter database software that can deliver to a hybrid cloud. 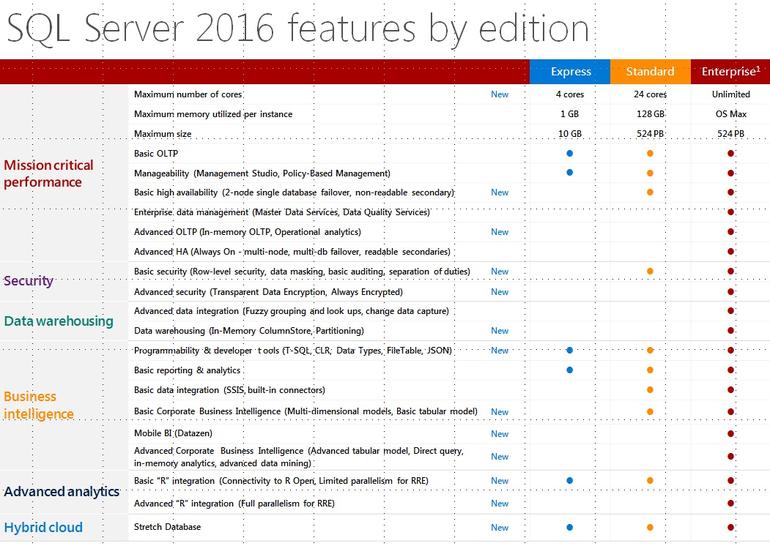 The newest edition of SQL Server will feature built-in analytics capabilities. Users will be able to build their critical intelligent applications with a sophisticated secure data warehouse. Users will be able to access their mobile business intelligence on multiple devices (phone, tablet, laptop, desktop computers). This tool will also give users the opportunity to manage their own KPIs, mobile reports, and traditional reports found in a modern web portal.

According to Microsoft, the SQL Server 2016 Developer edition will be a free download, so users will have the opportunity to take advantage of its full capabilities.

A new feature unavailable in previous versions is the Stretch Database function, a hybrid cloud technology which enables users to store data in their own premise databases, and ship data that they use less often to a separate cloud. According to the SQL Server Blog from Microsoft, “Hybrid cloud solutions that can reduce storage costs, improve high availability and simplify IT operations”.  Applications that are connected to a databases can still be viewed.

For users who have complained that their applications don’t offer real time operational intelligence, Microsoft SQL Server 2016 has addressed these concerns. Built-in advanced analytics and in-memory technology will enable users to increase query performance to 100x the capability of the original disk based solutions.

This enterprise scale warehousing will let users optimize MPP scale out software which can also be combined with scaled out appliance architecture found in the Analytic Platform System (APS).

Microsoft SQL Server 2016 will see a major emphasis on security. A new feature, Always Encrypted technology, will help protect user data, and this will not affect the performance of the database. Your data will be protected at rest and in motion. Row level security will allow users to control the access of their data based on characteristics of the user.

This will occur without modifications to applications. SQL Server 2016 will also leverage dynamic data basking, which can help prevent access to unauthorized data through its real-time obfuscation.

Improvements on Performance and Scale

With the increase in demand for warehouses to manage and process a greater volume of data that ever before, Microsoft sought the need to deliver a SQL server solution that could keep up with this trend. SQL Server 2016 has made recent benchmarks with some of its hardware and software partners to create the fastest in-memory database for applications.

Perhaps one of the most significant announcements for Microsoft’s SQL Server 2016 is the projected compatibility with Linux. Microsoft’s decision to include support for other operating systems expands the potential to diversify its user base. Clients who were at first resistant to using SQL Server can now find it a viable option, since they don’t run the risk of being locked into the Windows platform. The Linux version of SQL Server is slated for release in mid-2017.

Stay tuned for more news on SQL Server 2016. To learn more about how you can host your SQL Server database in the cloud, visit our dinSQL page, or request information.

FacebookTwitterLinkedInPinterestEmail
Have questions about hosting Microsoft SQL?
Talk to us
Test drive Hosted SQL with help from us.
Schedule a Customized Demo