Impact of Covid-19 on the Virtual Desktop Infrastructure (VDI) Market

The ongoing pandemic has really shaken things up when it comes to the choice of IT infrastructure. The rapidly increasing trend of remote work is causing enterprises to re-visit their entire IT infrastructures in a whole new light. 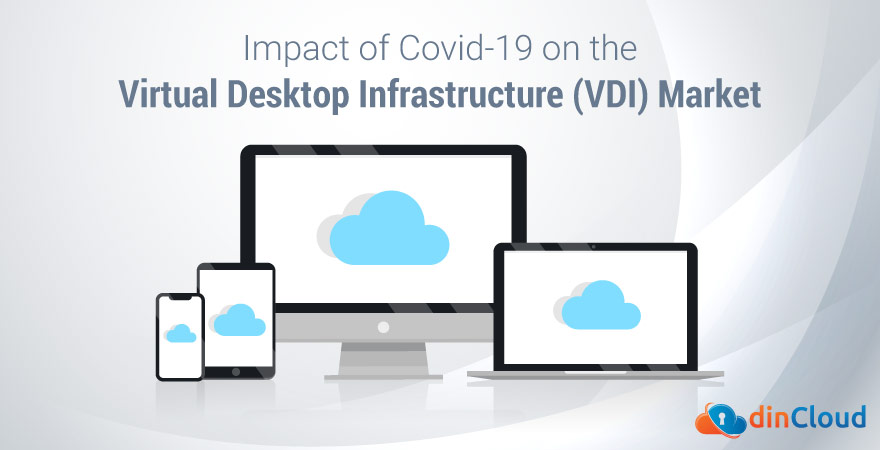 Recently, a study was released by Market Insights Reports, a company that closely watches the tech sector in general and the Cloud in particular. As per the report, the global Virtual Desktop Infrastructure (VDI) market is well poised for a strong and consistent growth.

The forecast period for the said research report is from the year 2021 to 2026. As per the estimates cited in this report, it is expected that the global VDI market could attain a consistent Compound Annual Growth Rate (CAGR) of over 17% during the above period.

Such a strong growth rate is quite exceptional, given the current disruptive impact of the Covid-19 pandemic. The report also cited that despite the un-willingness of most enterprises for long-term financial commitments, VDI adoption was still a top priority.

Transition from a CapEx to OpEx Model

According to the findings of the report, it was found that one of the strongest reasons for this growth of Cloud Virtual Desktop Infrastructure (VDI) or Cloud Hosted Virtual Desktops was that deploying entities can seamlessly transition from a CapEx to an OpEx model.

This costing model offered by Cloud VDI providers like dinCloud suits the majority of deploying entities, as they have to pay only for the cloud resources such as storage, CPU, RAM and GPU that are actually utilized.

Moreover, deploying entities save Capital Expenditures (CapEx) by adopting Cloud VDI because they no longer need to setup or maintain on-premise data centers. This need is seamlessly fulfilled by the cloud infrastructure of the Cloud Service Provider (CSP).

Another significant development that was cited as one of the reasons for strong Cloud VDI growth was the expansion of the existing cloud partnership between tech giant Google and Deloitte to new geographies.

In this context, the aggressive entry and investment in the South Asian market was cited as the most significant development. This is a huge and relatively un-tapped market segment, given the dense population and lesser mainstreaming of Cloud VDI solutions.

Lastly, one more significant trend that was highlighted in the research report was localization of data centers. What this means for the global Cloud VDI users is that now, their data will be residing much closer to their physical locations.

This development is expected to directly impact the Cloud VDI users in two positive ways. Firstly, enterprises that deploy Cloud Hosted Virtual Desktops will now be able to enjoy a seamless end user experience, as latency will further be reduced to a great extent.

Secondly, as data is now expected to reside very close to the jurisdiction of the deploying entity, there will be much lesser regulatory or compliance related limitations on moving the same to the Cloud. This will also pave the way for more adoption of Cloud VDI solutions.

The consistent growth trajectory that is being projected for the Cloud VDI market between 2021 and 2026 is good news for the Cloud industry as a whole. Cyber security is likely to remain a core area of concern for most Cloud VDI providers due to emerging threats.

However, Cloud VDI providers like dinCloud have demonstrated an impeccable record in keeping their cloud infrastructures at bay from the broad spectrum of cyber threats lurking around out there. We expect further investment in solutions that enhance security.