How will Cloud3 and Web3 Transform Global Work Trends and Collaboration?

Home | Blog | How will Cloud3 and Web3 Transform Global Work Trends and Collaboration?

Perhaps the best part about digital technologies is their constant evolution. More importantly, this evolution is for the better, in most of the cases. Digital technologies like the Cloud and Web have literally transformed the lives of billions of people on Earth.

The best part is; this evolution is showing no signs of slowing down. This is even better news for the masses, as the ongoing socio economic and geo political situation is impacting the lives of nearly every individual on the face of this planet. 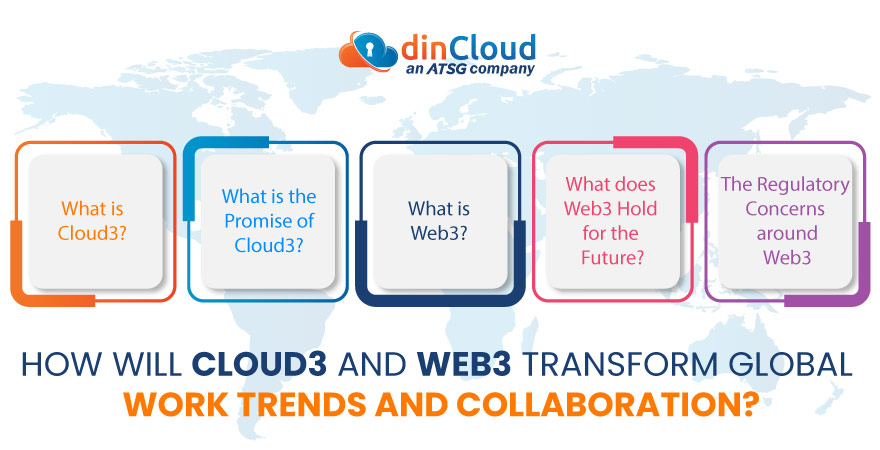 What we are experiencing across the globe is an unprecedented spike in international commodity prices, and escalating costs of living in general. This problem is of such a vast magnitude that no single government, no matter how stable, can handle it.

Related: Augmented Reality (AR) all Set to Transform the World Around Us

In order to deal with problems of a global magnitude, the general population will also have to chip in, and assist their respective governments as well as fellow humans in weathering this storm, which is unlikely to slow down in the near future.

In the broader scheme of things, digital technologies like Cloud3 and Web3/ will prove instrumental in making an impact towards this gargantuan task. In this post, we will discuss how these latest iterations of the Cloud and Web will make things happens.

In the most layman’s terms, Cloud3 is the latest iteration or form that Cloud Computing solutions, services and architectures are taking, just as we draft this post. Most of our readers will be well versed with the evolution of cloud computing infrastructures.

The Cloud Computing revolution was mainly triggered by the Software as a Service (SaaS) model, which opened up a whole new paradigm in enterprise operations. With the instant and massive success of the SaaS model, Cloud Computing has never looked back.

Sooner than later, we saw Cloud Computing make inroads across the length and breadth of enterprise operations. The next most immediate cloud computing model to strike mass scale success was Infrastructure as a Service (IaaS).

Related: Why is the Cloud a Better Choice for the Retail Sector Right Now?

After the SaaS and IaaS models had made a solid footing for themselves, the Platform as a Service (PaaS) model of Cloud Computing soon followed. This gave the developer community access to some of the best and most powerful development environments.

Leading developers from across the globe were able to leverage these development environments, while consuming them “as a Service”. This ushered in a whole new revolution of cloud native enterprise software and application solutions.

What is the Promise of Cloud3?

In its true sense, Cloud3 is the latest and most potent form of Cloud Computing infrastructures till date. The enterprise world and operations are now moving from a Remote and Hybrid model, towards a “Work from Anywhere (WFX)” model.

What’s more important is that now, Cloud Computing environments will be able to store, process and handle the all-powerful combination of Big Data and Artificial Intelligence (AI). It is with this very capability that we will be able to draw useful business insights.

Like its Cloud Computing counterpart, Web3 is also the latest iteration of the World Wide Web. It had very humble beginnings and relied upon the Hypertext Transfer Protocol (HTTP) to communicate with other webpages / nodes over the internet.

We then witnessed Web2, which added a whole new dimension of information, entertainment, flexibility and functionality to a global audience. Still, people have come to expect a lot more from the World Wide Web, than what it is already offering.

This is exactly where Web3 comes into the picture. Web3 stands to decentralize, or democratize the ownership and use of online / digital assets. Right now, the situation is pretty much skewed towards a handful of large tech enterprises and individuals.

Web3 aims to achieve this goal with the backing of block chain technologies, which are all about decentralization of digital assets and digital property. There also lies another huge advantage behind a decentralized web, and that is tremendous scalability.

Related: How is Cloud Computing Unlocking the Human Genome and Precision Medicine?

What does Web3 Hold for the Future?

The Web3 ecosystem will thrive on digital instruments of storing wealth, such as crypto currencies, non-fungible tokens (NFT) and much more. These stores of wealth in digital formats will be instantly shareable, across any corner of the globe.

It is expected that once the Web3, block chain powered ecosystem will take full effect; it will become much easier for the currently underprivileged user segment of the web to create its own wealth through viable digital products.

Then, it is also expected that the Web3 ecosystem will be highly conducive for rallying the masses towards a good cause, such as helping the refugees and displaced individuals in the event of a war or military conflict in any part of the globe.

Further, all this can be done without the direct involvement of the respective governments, as the decisions of governments are not taken solely for humanity. There can be other “compelling” reasons for supporting a humanitarian cause, or ignoring it.

The Regulatory Concerns around Web3

It is pertinent to mention here that despite the vast promise Web3 stands to deliver across the world, there still remain a lot of regulatory concerns and issues around this. In addition to regulatory concerns, there are also security and privacy issues.

However, the consensus view is that as these technologies establish a strong foothold and garner mass support, their legal and compliance frameworks will also evolve along the way. As users of technology, let us gear up for the Cloud3 and Web3 revolutions.

Contact dinCloud, an ATSG company, for Cloud Computing solutions and services for your enterprise that are secure, reliable, scalable and cost efficient.