Home | Blog | How is the Film Making Industry Benefitting from Cloud Computing Solutions?

Over the past months, the influence of Cloud Computing solutions has increased in nearly every sphere of life. However, the film making industry still seems like an area that has little to do with the Cloud.

While you may believe so, it may come as a surprise for a lot of you that the Cloud has made its way in the film making industry as well. In this post, we will discuss how cloud solutions are making life easier for our film makers and this industry as a whole. 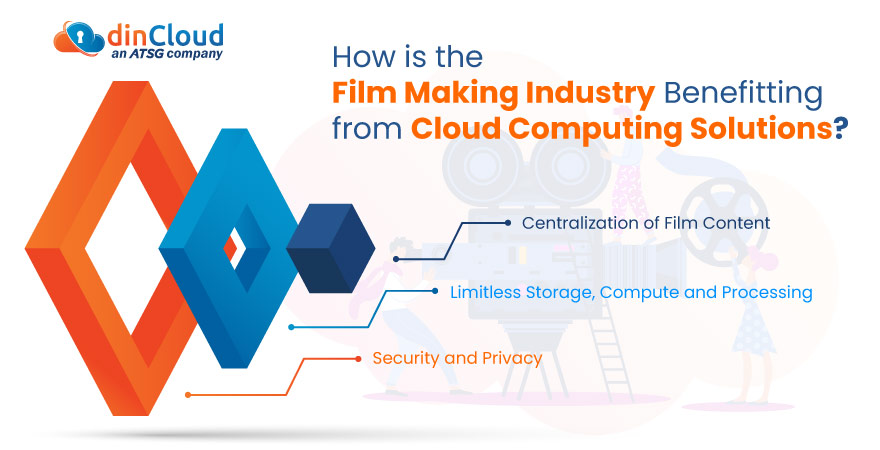 Although this is a general Unique Selling Point (USP) of cloud solutions, the film industry is a domain that tremendously benefits from centralization. Firstly, centralization of the content is extremely important to prevent any pre-release leakage of content.

In the entertainment industry, it is all about creating the right hype, drama and anticipation among viewers about a film’s content. So, any “leakage” of even the slightest details of a film in the making can prove very costly for the production house in many ways.

Secondly, to make a blockbuster film these days, you need a lot of individual elements such as animation, sound tracks, special effects and more. Due to the super busy schedules of the professionals in the entertainment industry, their availability can be a big problem.

As a producer, you have your work cut out due to any such issue. Either you compromise on quality, which is never a good idea, or you can take your work to the professionals that are a brand name by themselves within the entertainment industry.

Over the Cloud, as you have centralization of most, if not all your film content that is in the making, it is very easy for you to give remote access to the relevant professionals. Say your sound track artist is in Tokyo, while filming is taking place in the US.

In that case, all you have to do is give cloud access to the sound track expert in Tokyo, who will get the things done while sitting on an entirely different continent. As the film’s content is centralized, it is easier for film makers to keep tabs on the current progress as well.

Related: Why & How are Enterprises Moving towards Green IT in 2022?

In modern films, animations and special effects are gaining more and more importance. It comes as little surprise that even fully animated movies are raking in millions of dollars on the box office, all over the world.

Graphics, animations and special effects in movies are a very processing intensive sub-domain of film making. This is yet another area where the nearly limitless compute and processing muscle of the Cloud comes into play.

The cloud infrastructure of dinCloud comes with a multi layered security that is built into the very service. Both security and privacy of the film content, whether it’s the production phase or post release, is extremely important.

If a film’s content gets leaked before the official release, it can result in serious revenue losses for the film maker and the production house. Any such incident is also not well received by the potential audience of that film, as people mostly tend to lose interest.

The secure cloud infrastructure of CSPs like dinCloud not only keeps your film’s content safe from prying eyes during the production phase, but also after the film starts to make its way to cinemas or other release platforms like Netflix.

As a result, the actors, producers, directors and all the support staff that put in their best efforts in making the film, can reap the rewards of their hard work. This approach otherwise maximizes the Return on Investment (ROI) for the financers.

Related: Why Moving to Cloud Computing Still Makes Sense in 2022?

The film making sector is just of the many examples of industries that are truly benefitting from Cloud powered solutions. Over the Cloud, you get the perfect combo of security, privacy and cost savings in a single service, just like the “superheroes” in our movies.