Discussions of server virtualization benefits tend to start with potential cost savings. After all, hardware generally is the most expensive element in the data center, and virtualization, which enables a single machine to be broken down into several virtual machines, meaning fewer servers and related IT hardware. This effectively reduces the data center footprint, along with power, cooling, maintenance, and management requirements. Server virtualization also eliminates the need to over-provision servers to meet user demands, as a virtual server can be sized to its purpose.

Even so, cost savings may not be driving the adoption and usage of server virtualization. According to a study by Computer Economics, disaster recovery “is the single most important reason” why organizations are adopting Infrastructure as a Service (IaaS) capabilities, such as server virtualization. Among organizations that are using or planning to use IaaS, about 60 percent plan to use the services for disaster recovery, says the research firm. There are even those who contend that disaster recovery is cloud computing’s “killer app.” 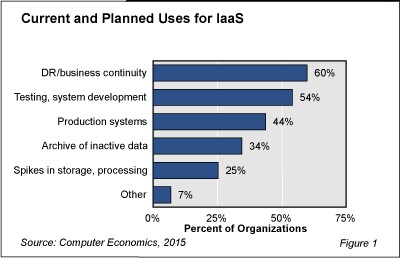 Considering the possible consequences, perhaps that’s not so surprising. For one, the pains of downtime can be debilitating to a business. A 2013 study by Aberdeen, for instance, found that the average cost of downtime for the typical mid-sized company (with revenues between $50 million and $1 billion) is a whopping $215,638 per hour. For smaller companies with revenue of less than $50 million, the damage, though considerably less, is still a significant $8,581 per hour of downtime, on average.

All the while, disaster recovery is quite a bit easier and quicker when a data center is virtualized. With physical servers, the re-deploy time after an event or outage can be dependent on a number of variables. A backup server, for starters, must be available and ready, and the data on the back-up server had better be current. There’s also the time it can take to boot-up a typical server. The average company in the Aberdeen survey took more than 5 hours to recover fully from a downtime event.

Virtualization technology, on the other hand, enables image-based backup and restoration, which means a virtual image on a machine can be taken and instantly re-imaged to another server whenever necessary. These “snapshots” can be taken throughout the day, so data is always up-to-date, and snapshot technology can be applied selectively – either to an entire virtual machine or only to the blocks that have been altered. In the event that a disaster strikes the actual data center, it’s even possible to move a virtual machine to a different location. And firing up a snapshot takes less time than booting up a physical server, minimizing downtime.

The advantages don’t stop with unplanned events and disasters. A snapshot also can be taken of a current configuration before an upgrade is performed. If the upgrade fails, IT can use the snapshot to return to the original conditions, often without interruption on the part of the users. It other words, the potential risks that come with making changes are dramatically reduced.

Incidentally, Computer Economics, in a separate study, also found that the outsourcing of disaster recovery has the highest potential for successfully lowering costs when compared with 10 other commonly outsourced functions. Sounds like a killer way to launch a virtualization strategy.

Martin Vilaboy is editor-in-chief of ChannelVision magazine, a printed and online source for resellers and brokers of communications and IT products and services. For more information, visit: www.channelvisionmag.com; CV@LinkedIn.