On this particular day, Farhan Mirza, dinCloud’s director of field services, noticed that a single IP address was performing a large amount of scans on dinCloud hosted devices. The pattern wasreflective of a malicious scan. (See image #1) 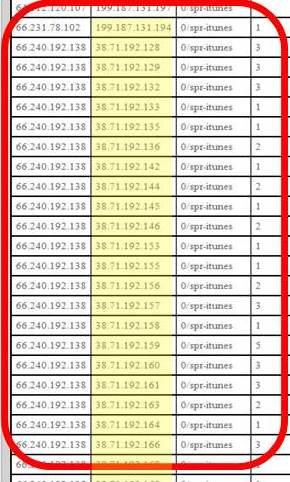 The dinCloud technician was able to recognize this via the automatic reports that are generated by dinCloud security tools.

The dinCloud security technician immediately began monitoring all traffic from this IP address. At the same time, generating an e-mail to the hosting party of the malicious “infected” server. (See Image #2) 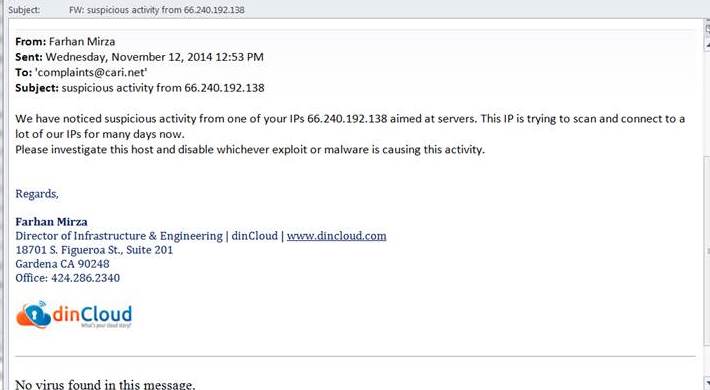 And it Turns Out…

It was not a malicious server but one of the “Good Guys”. In fact – it’s a real good guy.  It was from one of John Matherly’s servers, which was running the SHODAN search engine. The SHODAN project is the tool that surveys Industrial Control Systems (ICS) – to insure they are NOT vulnerable to terrorist attacks.

“The project is called Shodan and the data has already been actively used by various organizations around the world for free (the data is made available for free to academic/ non-profit institutions). Here’s an example of a researcher finding tens of thousands of critical infrastructure devices online, which were then reported to the regional CERTs before the research was published (http://www.wired.com/threatlevel/2012/01/10000-control-systems-online/). There’s also an article in the Washington Post about me and Shodan that explains the project and how it’s been used a bit further: http://www.washingtonpost.com/investigations/cyber-search-engine-exposes-vulnerabilities/2012/06/03/gJQAIK9KCV_story.html“

Both SHODAN and dinCloud are Doing Their Jobs

In summary, just as John Matherly is doing his job by detecting insecure U.S. infrastructure, dinCloud is doing its job detecting suspicious traffic attempting to enter (and leave) dinCloud’s cloud.

Contact us – and we’ll give you a demo! All the best! Cloud on!

For more information on our Cloud security, please visit our Cloud Security page or request information to speak with a cloud specialist.

facebooktwitterlinkedinpinterestEmail
Are hosted virtual servers right for your business?
Talk to us
Test drive virtual servers from your work computer
Schedule a Customized Demo