Intro to Citrix Receiver and Why Prefer Conflux by dinCloud

Citrix is a notable name in the cloud computing industry. The company offers access to virtual desktops and virtual applications that reside over its servers. The brand also manufactures other hardware that is required for cloud deployments. 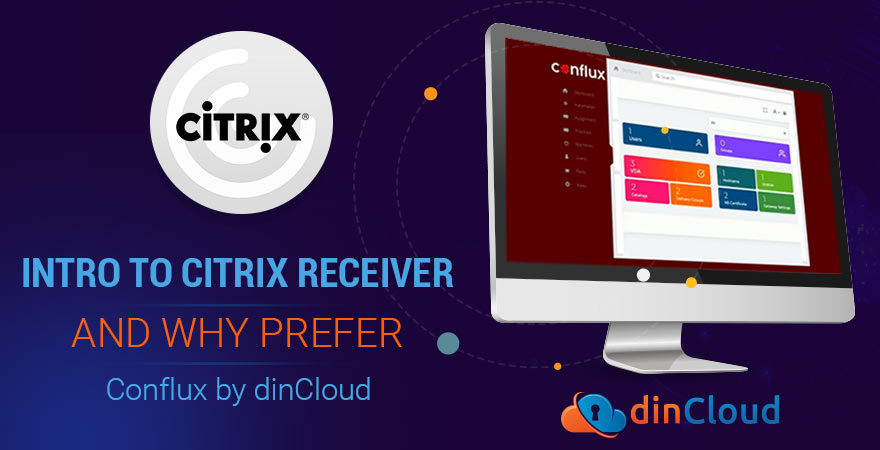 
As a premier Cloud Service Provider (CSP), dinCloud strongly believes in relying on the best hardware and software for its cloud infrastructure. With this vision in mind, dinCloud became a Citrix partner and this relationship has further strengthened ever since.


This is a question that may pop up in the minds of few decision makers that are prospecting for cloud based solutions. dinCloud is a multi faceted cloud provider that offers a lot of choice in terms of architectures such as Citrix, Microsoft and more.

Secondly, dinCloud has designed its standardized cloud solutions in many iterations so that each valuable cloud user can choose the most optimal cloud service in terms of both costs and quality. We also offer customized cloud solutions after due diligence.

What is Citrix Receiver?


It is a client software that enables access to virtual desktops and applications hosted over Citrix servers. This software is installed over client devices that we also refer to as endpoint devices. It is a vital component for citrix based cloud deployments.

The receiver acts as a bridge between a virtual desktop or application and the client device. A plus point of citrix receiver is its compatibility with multiple operating systems and device platforms. This makes the receiver a vital component of the overall deployment process.


This is yet another area where this software offers a lot of ease to end users. When installing software, it often becomes very frustrating to exactly specify your operating system (OS). It’s partly because similar OS are at times too tough to distinguish.

With the goal of making life easier for the end user, when you visit the citrix receiver official download page, your operating system is automatically detected. This not only saves the end user’s time, but also eliminates the odd chance of incorrect selection of OS.


The citrix receiver has undergone multiple changes and this evolution has been a back and forth affair. Citrix receiver was introduced as a replacement for ICA Client. Previously, ICA was comprised of various software components.

To create ease for end users, Citrix converted the above three components into Plug-ins and merged them into a single product called Citrix Receiver 1.0. Release of Citrix 3.0 version marked the split of the software into Receiver Updater and Receiver Insider.

What made Citrix Receiver Challenging?


The constant changes to the structure and offering of citrix receiver did not sit well with the end users and cloud professionals. Secondly, the presence of so many individual components made the management bit very difficult for end users.

Configuring each and every citrix receiver component is not only confusing, but also time taking. One more factor that added to the list of issues was the software’s pricing, which was on the higher side.

What is Conflux by dinCloud?


We have highlighted earlier that deploying and managing Citrix environments is difficult, complex and time taking. Given the complexity of certain steps, one needs high level cloud skills to accomplish this task with success.

dinCloud is a Cloud Service Provider (CSP) that believes in constant innovation. A major milestone in this evolutionary journey was attained in the form of Conflux. This is a revolutionary tool by dinCloud that automates many processes of Citrix Deployment.

With Conflux at your disposal, you will be able to effectively deploy and manage complex citrix environments with ease. Most of the processes in Conflux have been automated and proceed in the right chronological order.


With a Citrix partner like dinCloud that offers some of the highest quality cloud services, you don’t need to look any further. Even otherwise, Conflux by dinCloud will enable you to manage complex citrix environments with absolute ease and surety.

Contact Us if you have any questions about our industry leading cloud solutions or Conflux, our Citrix automation tool.